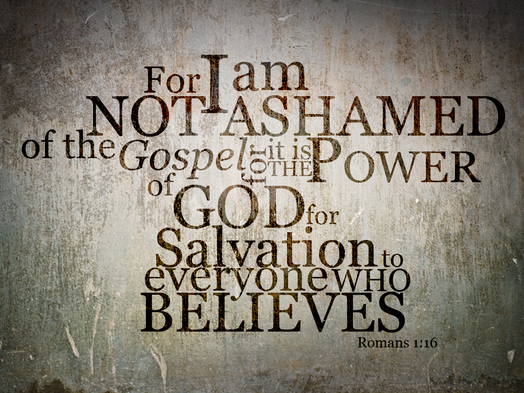 I first put faith in Christ when I was in high school. My conversion, as far as I can tell, was sincere. I understood that Christ had paid the full penalty for my sin, and I surrendered to do whatever God wanted me to do. I got a big list of stuff to start and stop doing for God.

I went to a Christian school that emphasized conformity to a set of rules. We didn’t dance, because dancing would make you have impure thoughts. And we couldn’t listen to music with a beat in it because that would make you want to dance. We weren’t allowed to go to see movies, because movies would make you worldly. We couldn’t even go see the Christian movies when they came to the theater because if people saw us at the movies they might assume we were there to see worldly movies, and that might make them think it was OK for them to see worldly movies. It was rules like these that real Christians lived by.

I learned that real Christians tell other people about Jesus, so I set goals for how many people I would tell about Jesus in a given month. I even established a maximum time limit (fifteen minutes) for how long I would sit with a stranger on an airplane before bringing up whether or not they knew Jesus.

In college I learned that real Christians love international missions, so I took lots of mission trips (twenty-five countries in ten years!) and gave lots of money to missions. I even packed up my entire life into an oversized duffel bag and went to live in a third-world fundamentalist Muslim country for two years.

I later learned that real Christians love the poor. So I sponsored a Compassion child. But wasn’t she just one in an endless sea of hurting people that desperately needed my help? Should I adopt five more? Twenty-five more? Did I really need to drink that Coke with dinner? Couldn’t that money be used to feed another orphan? I constantly felt guilty about anything I owned. Whatever I gave, it wasn’t enough, because there was always more I could give. And, after all, “God doesn’t judge your giving by the amount you give, but by the amount you have left.” I always had a little more left than the kid in India did. And then of course, there was the unfortunate day that I read the biography of a missionary who talked about how much more you could do for God if you were single, and so I concluded if I was really serious about being used maximally for God, I had to be single. That’s what Paul said, right? To paraphrase 1 Corinthians 7, he said, “I wish you were all like I am” (i.e., single), so you could be unencumbered in ministry. Thus, if I wanted my life to be maximally leveraged for God’s kingdom, how could I desire anything but celibacy? Wouldn’t I be willing to be single for seventy years so souls could be saved for eternity? So I tried to ignore girls for a semester during college— but to my chagrin, they wouldn’t leave me alone. (At least that’s how I remember it.) By that time I was living in a way that would have met just about anybody’s standard as a “real,” committed Christian. But this religion of so-called grace often felt more to me like drudgery than delight. No matter how many rules I kept and how disciplined my life was, I walked around with an ever-present sense of guilt. In the deepest part of my heart, I knew— knew— God was not really pleased with me, because there was always something I could be doing better. The really good Christians were always doing something that I wasn’t.

To make matters worse, my marriage kept revealing how selfish and petty I was. Seeing others more successful than me in ministry made me jealous to the point that I delighted in the thought of them falling into sin and being disqualified from ministry. I still felt enslaved to the lusts of my flesh. My service for God was fervent, but my passions for Him were cold. I certainly didn’t desire to know Him more. I was tired, and while I would never admit it, I was starting to hate God.

He was the merciless taskmaster always standing over me yelling, “NOT ENOUGH! I want MORE!” He was always there, waving damnation in my face, saying, “If you want My approval, there’s something else you must do.” His constant demands were driving me insane. The more I strived to walk in His ways, the less love I felt for Him. The more closely my feet followed Him, the more my heart ran away. Oh, I had the facts down. I knew He had taken the penalty for my sin. I also knew that He was the universe’s most satisfying possession. But if my head knew that truth, my heart didn’t feel it. I was motivated to walk with God primarily by my desire to stay out of hell.

Recently, however, I discovered something that has changed everything. The more closely my feet followed Him, the more my heart ran away. The gospel. I know saying that sounds strange to say, but it is true. It’s not that I didn’t understand or believe the gospel before. I did. But the truth of the gospel hadn’t moved from my mind to my heart. There was a huge gap between my intellect and my emotions.  The Puritan Jonathan Edwards likened his reawakening to the gospel to a man who had known, in his head, that honey was sweet, but for the first time had that sweetness burst alive in his mouth. That happened to me.

“Rediscovering” the gospel has given me a joy in God I never experienced in all my years of fervent religion. Now I sense, almost daily, a love for God growing in my heart, displacing a love for myself. The jealously that once consumed my heart is being replaced by a desire to see others prosper. I feel selfishness giving way to tenderness and generosity. My cravings for the lusts of the flesh are being replaced by a craving for righteousness, and my self-centered dreams are being replaced by God-glorifying ambitions. A power is surging in me that is changing me and pushing me out into the world to leverage my life for the kingdom of God.

I still have a long way to go, and I daily have to struggle against the God-hating desires of my flesh, but I am changing. I am, as Paul would say, making “progress” in the gospel. The gospel has done in my heart what religion never could. I believe it can do the same thing for you. That’s what the first section of training is about. Over the next several lessons, I want to reacquaint you with the gospel. Not just with the doctrines, but with its power. The gospel is the announcement that God has reconciled us to Himself by sending His Son Jesus to die as a substitute for our sins, and that all who repent and believe have eternal life in Him. I want you to see the gospel not only as the means by which you get into heaven, but as the driving force behind every single moment of your life. I want to help, in some small way, your eyes to be opened (again) to the beauty and greatness of God. I want you to see how the gospel, and it alone, can make you genuinely passionate for God, free you from captivity to sin, and move you outward to joyful sacrifice on behalf of others. Here’s how we’re going to go about this together. The first section is about why the gospel— and only the gospel— is the means by which we can truly be changed. I want to show you why “religious” (what we’re going to call “mechanical”) change absolutely, positively, does not work. In this section, I will show you how the gospel changes us in a fundamentally different way than religion does, and that it can do something in our hearts that religion is utterly unable to do.