1. The Condition of Christianity 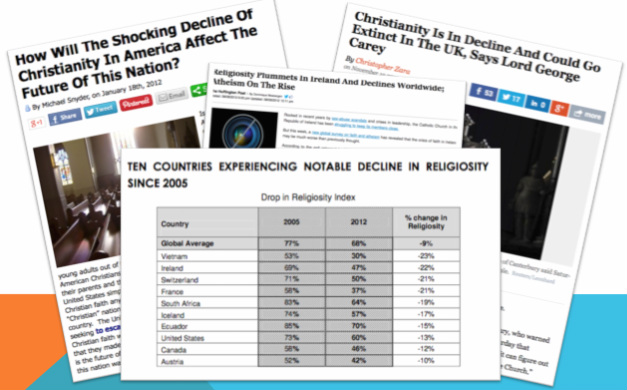 Right now in America we live in a time that has seen much change just in the last ten to fifteen years.  Social media and the iPhone have changed the way we communicate and advances in web development and video sites such as Vimeo or YouTube have changed the way we consume information.  The fact is that many changes have happened not just in the technology but in the way people think and what they do. What is interesting is that with all the change around us what really has changed that much is the organization of church itself.

Have you ever stopped and considered who the fastest growing faith group in America is? When I ask a question such as this most people ten to lean there answers toward Evangelicals or Pentecostals.  However, right now in America the fastest growing faith group in the world is Nonbelievers in numbers and percentage.  From 1990 to 2001, the last good count, Nonbelievers doubled around the world from 14 million to 29 million. Their proportion of the population grew from 8 percent to more than 14 percent. What does that mean?  It means that there are more than twice as many people who claim to have no religion then participating Christians who subscribe to Christian beliefs.  Consider these stats concerning Christianity:
While statistically it doesn't look good for the condition of Christianity Globally or in America. Another consideration for us to look at is the effectiveness of the Christianity in America. Consider just a few stats concerning American Christianity:

While I understand these are not happy stats, we need to understand that this is the reality of Christianity and the condition of the church around the world, including America.  This importance of being aware of this can not be understated. As Christ's Ambassadors we need to know the type of world we live in as well as the people we are trying to reach out to.  If these broad statistics are true for our world how much more will it be true on the campuses we are called to? The fact is while every campus is a different context missionally, the feelings portrayed in these statistics will be intensified in a place like ac college campus. Therefore, as we understand what we are walking into it should seem evident that our approach for reaching our context needs to think past the same models and formulas that have led to statistics such as these.  While these statistics show a declining Christianity it also conveys that we a crisis in the modern churches approach to evangelism. In the next section we will look at the gap between the church and the world.  That gap is called cultural distance.  By understanding cultural distance we will be able to home in on our methods and see if they way we are functioning is working