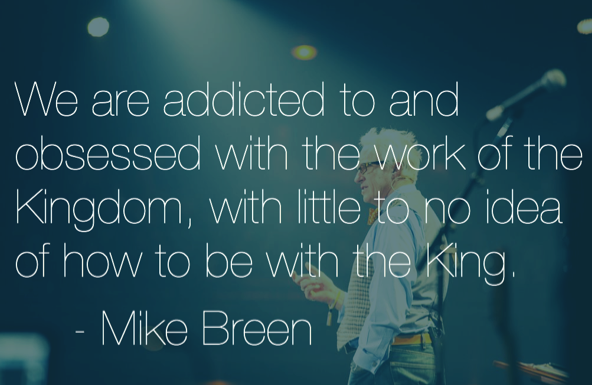 1. Religious activity fails to address the "root" that drives our sin.
At it s root sin is driven by the fact that we desire something more than we desire God. Religious change targets the acts of sin without addressing the idolatry that prompted that sin in the first place. In fact, a lot of times, religion becomes simply another way to get hold of that thing we most desire.

Let me give you an example: Tim Keller tells of a notoriously sexually promiscuous kid he knew in college. The young man’s sexual prowess was about more than lust, however. Gaining “notches on his bed post” was a source of identity to him— it proved he was a man, gained the admiration of his peers, and gave him a sense of power over women.
During his junior year this guy got involved with a campus ministry and “got saved.” He quickly got “on fire for Jesus” and gave an inspiring, bold testimony of his new commitment to Christ. However, Keller says, there was still something “off” about this guy. He was not a very enjoyable person to be around. If you were in a discussion with him, he had to show why he was right and you were wrong. In a small group he wanted you to recognize his opinions as insightful. He always wanted the positions of prominence.

The guy had all the external signs of love for Jesus. He had repented of his sexual promiscuity. He went to lots of Bible studies and witnessed boldly for Jesus. However, it was apparent that he had simply traded sex for religion as the outer manifestation of his true desire. What he really wanted— his “root idol”— was power over others.  This is not conversion to Christ. This is a new means of pursuing an old idol. True worship is obedience to God for no other reason than that you delight in God. There is a fundamental difference in serving God to get something from Him and serving Him to get more of Him. True Religion is when you worship and serve God for nothing else but more of God.

Many people use religion as a way of getting something else from God they want— blessings, rewards, even escape from judgment. This is wearisome to us, and to God. But when God is His own reward, Christianity becomes thrilling. Sacrifice becomes joy.  In other words, getting religiously active in a church, even in a good one, does not necessarily mean you have become a true worshiper of God. You may have simply discovered religion to be a more convenient means to other cherished idols like respect, pride, success, a good family, or prosperity.

2.  When our acceptance is based on Performance we exacerbate two root sins in our heart: pride and fear.
The nakedness we apart from God in the Garden of Eden left us to feel exposed, so much so that we were left with a deep sense of fear. That is to say that we felt that we were not accepted as we were before our creator. Because of this we felt driven to do something to make our selves more acceptable to God.  The other side of this coins is that we ever we do to make us better then others gives us a sense of pride, which leads us even deeper into sin. Pride gives rise to many other horrible things such as jealousy, violence, impatience, intolerance, judgementalism, and many other vices.

On the other hand when we feel like we don’t measure we have a sense of despair. Our nakedness and fear of rejection just grows.  This in turn only leads us further down the road to try and distinguish ourselves and to set ourselves apart from the jealousy and despair all around us.  Despair creates a void, which creates in us a drive to lust after our flesh to fill it up.  Despair in our hearts creates a vacuum in our soul that drives us to thrive on craving of greed, drugs, alcohol, creature comforts, workaholics, obsessive parents, obsessive romantics, and more.

Performance based acceptance thrust into a cycle of pride and despair, acceptance by God grace produces exactly the opposite fruit and takes away our sense of nakedness and our craving for approval. We are complete in him.  We are free to allow other to see our faults, because we have approval of God, the one person who matters. We have no need to be afraid to loose all we have because we have all we need in him.

3. The insecurity of always wondering if we've done enough to be accepted causes resentment of God, not love for him.

In the very first section I talked about how I tried to make up in fervency for God what I did not have in love for God. The reality was that fervency doesn't make up for love and my love wasn't growing for god. In fact fervency often leads us to question God because we want him to accept our works, our offering in replace, of Jesus'.  Wanting approval and accepting god's love are not the same thing.  We can never pay off what Jesus already paid. When we do not realize this we can enter in to a rest to find any peace.  Martin Luther once said, "My fear of God's judgement was producing a hatred for God that was driving me further and further away from Him, even if my actions looked on the outside, more godly."

Once upon a time, a very poor carrot farmer lived on a small farm in rural England. During one harvesting season,     he unearthed the largest carrot he had ever seen. He thought, “Now that is a carrot that befits a king.” So he                 traveled to the king’s palace, obtained an audience, laid the carrot joyfully at the king’s feet. “Oh king,” he said, “you     have always been such a wonderful, fair and gracious king to me, and I love you very much. As a token of my love     for you, I want you to have this carrot. It is a gift which you truly deserve.” The king, touched by this man’s simple         offering, responded, “Thank you for this gift. I happen to own the farmland that surrounds your farm and I would like     to give you that land as a gift. Please know that it also is a small token of the affection that I have for you, my son.”     One of the king’s noblemen, standing in the court that day, thought, “Wow! If the king would give all that farmland in     response to a carrot, imagine what he would give for a real gift!” So the nobleman went that night and found the         most majestic horse he’d ever seen and brought it to the king the next day. The crafty nobleman said, “King, you
are a wonderful and worthy king. As a token of my love for you, I want you to have this horse as a gift.” The king,
being very wise, saw through the ruse, and said to the nobleman, “Yesterday the poor man was giving the carrot to
me.  But today, you are giving the horse to yourself.”

When our salvation depends upon our righteous behavior, our righteousness will be driven by a desire to elevate ourselves in God's eyes.  This is not love for God: it's self protection.  Worse it's religion.  The gospel turned religion upside down. The gospel assures us of God's acceptance, given to us a gift earned by Christ's worthiness, not ours. In response to that gift we are moved to obey and abide in him.  We must therefore saturate ourselves in the truth of the Gospel.

Consider the truths of this Gospel prayer.

In Christ there is nothing I can do that would make you love me more, and nothing I have done that could make you love me less. Your presence and approval are all I need for everlasting joy. As you have been to me I will be to others. As I pray, I'll measure your compassion by the cross and your power by the resurrection.